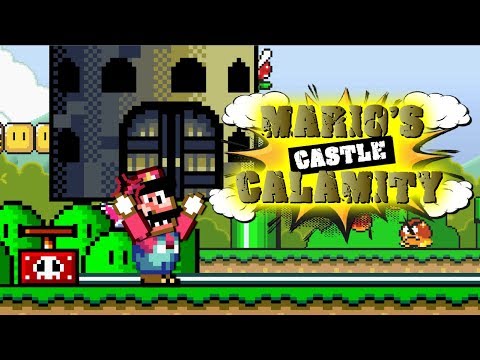 ***This video was meant to be released first day of April***

Mario is back at destroying (at least attempting to) castles once more! Will Mario prevail or will he just crumble apart instead of the castle? A remake of a classic that was made by me, Mario’s Castle Calamity 2.5.

Be sure to check these channels who provided the voices for other goodies! Without them, they wouldn’t have been able to deliver laughs!

Howdy, yall! It’s been a while, hasn’t it? Last video was uploaded a little more than a year ago! Jeez, where does time fly? I apologize for taking so long to upload new content, but you have to understand that I recently graduated college and am busy with working two jobs. One of them being working at a Television Studio doing Motion Graphics and Design!

Believe it or not, I was planning on a making a certain video right after Super Toad Run last year for the summer, but the voice actor I had planned kindaaaa flaked on me, so I had to come up with a new idea since I thought that voice actor fit the role for a character really well. Oh well, maybe this year? Despite…summer being a few months away…

Anyway, if you’ve noticed or not, but back in late summer of 2017, there was a resurgence or revival of the Mario Calamity trope. There were calamities being made everywhere. Last prominent calamity that actually got attention were both Goal calamities back in 2015, was it? One of them being mine and the other that should not be named. So, what better time to make this video then? Yup, that means I’ve been working on this video since end of August 2017. MORE THAN HALF A YEAR. Maybe the video length has something to do with it…Also, I hope I’m not too late to the party. *Wink wink*

Overall, this video was video was to be “self-aware” of the whole concept as well as my own channel! So take everything with a grain of salt. No need to get offended or whatever. I won’t go into too much detail just in case. Side note, notice the time length of this video. That is literally the length of a normal episode of whatever show you watch. I’m not trying to do this on purpose. I thought Super Toad Run was going to be the longest video I ever had but, of course, I prove myself wrong again. Ughhh.

Okay, I think I’ve said enough. What are you doing reading this block of text anyway? Go! Go watch my video!

Don’t forget to follow me on Twitter. Please, guys. I see a lot of you asking when the next video is and so on. You’re questions will be answered if you just read my occasional updates!