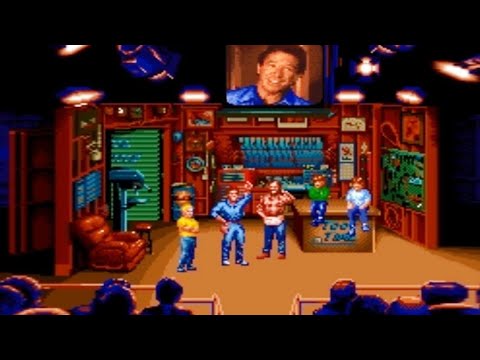 Of all of the 1990s American sitcoms to turn into a video game, there really had to be many more appropriate choices than Home Improvement. Seriously. For those of you that don’t remember it (or are too young to have seen it), consummate idiot Tim Allen works on a television show, with cohost Al Borland, showing off power tools from Binfood Tools. He’s obsessed with making stupid grunting sounds, destroying his house, and blowing things up in his never-ending quest for “more power.” His wife was the necessary but detestable nagging voice of reason, and his three teenage boys were generally useful only as props to teach hackneyed moral lessons with. I think that about covers it.

So how might one turn that concept into a video game? Well, if you’re one of the three people that ever *actually* liked games that presented you with giant mazes filled with random, must-collect items, get ready to be excited!! …?

Really, that’s all Home Improvement is. And it is absolutely dire because of it.

There are a lot of fun little details – the intermission scenes are pretty neat pixel-recreations of Tool Time, the theme song is… well, it’s recognizable, and the background of each stage (just to make sure you remember that these are TV sets!) have bits of scaffolding and framing showing though in unfinished spots. The graphics are reasonably nice, though they get progressively uglier throughout the game, becoming more and more cliched and muted looking as you progress.

There is also no manual. I think that the slip of paper in the box that said, “Real men don’t need instructions,” was also meant to be some sort of clever nod to the spirit of the show – of course it wasn’t merely a pretext for sidestepping the costs of printing a manual. Right?

Besides the ridiculous button layout on the control pad (good luck trying to hit fire and hold the run button at the same time!) the controls are responsive and do what they need to, but try to not change directions too quickly. The screen tracking tends to awkwardly rubber band around Tim, making for a somewhat nauseating movement whenever you change directions to quickly.

The game itself isn’t that challenging: the enemies are relatively easy to dispatch, and the game will point you toward the next item you need if you let Tim stand still for a moment. The real challenge comes from the battle of attrition it presents. It’s so long and unnecessarily drawn out that you’ll be crying uncle before you’re even halfway through.

I actually started playing this game about four years ago so that I could learn it and put together a video. I originally intended to make this video four years ago, but it’s a complete chore to play, and I utterly loathed the idea of taking it out and plugging it in. I actively avoided it.

The real shame is that the Pitfall-like mechanics are solid and the graphics are reasonable, but in supporting such a banal, tired concept, there is zero reason to care. The gameplay completely lacks any personality, and it revels in wasting your time.

A few weeks ago I meant to sit and record this, but about five minutes in, I actually got up, started a load of laundry, loaded the dishwasher, and then started cleaning my kitchen windows. There aren’t many games that I’d chose housework over.

But then again, it is called Home Improvement, so I guess there’s that? Honestly, I’d have preferred “This Old House” with Bob Vila as a SNES game.

Genesis owners should thank SNES players: the Sega version that was under development was cancelled because of this game’s abysmal sales!

Whoever requested this can kindly go ingest a lot of toxic chemicals now.
_
No cheats were used during the recording of this video.

NintendoComplete ( punches you in the face with in-depth reviews, screenshot archives, and music from classic 8-bit NES games!

Visit for the latest updates!