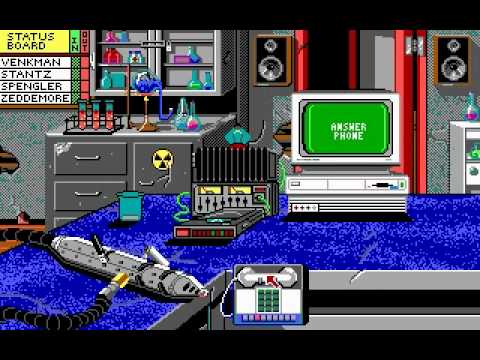 Venkman attended the correspondence school of shock broadcasting and took his ascerbic wit to the airwaves. Belittling weirdoes and wackos, he found his ratings up and his friendships down. Stantz and Zeddemore made a modest living breakdancing for yuppie larvae and running and occult bookstore. Egon retired to acedemia, tormenting unsuspecting human guinea pigs in the name of science. The former Ghostbusters were will integrated into mainstream society.

Unknown to the ex-Ghostbusters, a river of slime is growing under the streets of New York. It feeds on the bitterness, cynicism and bad tips of the citizens in the Big Apple. Coursing through the old pneumatic railway shafts and tunnels, it worms its way to the Museum of Art.

In the restoration wing of the museum a new occupant has moved in. It’s a 300 year old painting of the tyrant Vigo the Carpathian. He’s not a nice person. The painting is more than just a bad example of renaissance art: Vigo’s unholy immortal soul is trapped within, looking to get out and party. The portrait has been waiting for the spark which will bring the murderous madman back to life. This spark is the slime — the collection of negative energy of millions of gruff, short-tempered people living too close together, commuting too long to work, and taking too long on their lunch breaks.

As the slime and Vigo reach critical mass, only the former Ghostbusters can stop Vigo from coming back and leading the people in and even worse rendition of Auld Lang Syne than usual. To do this, they must battle the bureaucracy, the legal system and Venkman’s sense of humor. But they’re commited in more ways than one to making New York safe again for the out of work stockbrokers, the chestnut vendors and third world cab drivers that make the city unlike anywhere else in the world, except maybe Los Angeles. Or Chicago. Or, well, just about anywhere. Except where you live. Well, maybe there, too.